You are here: Home / News / Case study: how Slaughters is taking charge of its timeline

For years, lawyers have been grappling with a problem. Not only are some legal matters becoming more complex, but they are also getting much bigger. This article examines how Slaughters has addressed this project management issue and in the process improved transactional efficiency across the firm.

“In the past, you just needed one partner and two associates,” says Philippe Chappatte, head of Slaughters’ competition group.

“But over the past 15 years, projects have got larger, and now you usually expect to involve two partners, five to 10 associates and two or three trainees.”

The challenge created by ever-larger transactions also relates directly to how firms deal with the increased data they generate. As a firm provides advice on a matter over a period of years, the only way to collect and share material with clients has been either sending bulky emails or by publishing a deal book.

This issue raises challenges that are more to do with project management, a skill in which lawyers are not traditionally trained, than law. To address the challenge, Chappatte teamed up Dale Hodgkinson, the firm’s strategy and architecture manager, as well as Isabel Agnew, a professional support lawyer, and Ash Ali, a technology lead. Their task? To find a solution.

The team soon realised that it had to find a way to manage an ever-increasing amount of documents intelligently.

“Everything can be broken down into workstreams,” Chappatte insists, “so we decided to go out and find an online tool that would help us communicate with the client effectively, inform them about what we were doing and help find relevant documents in an intuitive way.”

In July 2016, the firm began exploring the market and, after some hunting, found the interactive timeline tool Tiki-Toki.

Tiki-Toki has the functionality to illustrate a wide range of subjects. For example, while the 3D demo on its website shows an illustrated history of the Tower of London, for Slaughters’ purposes it could function just as well as a digital project management tool which allowed its lawyers to streamline transaction management activities, giving them access to confidential information through an online secured storage system.

“We found it had a very user-friendly interface,” Chappatte confirms. “You could control a series of colour lines representing the workstreams and see a whole project divided into sections throughout a timeline.”

An index allows lawyers to access key current and historical documents located in the timeline.

“We’ve been giving advice on multiple issues over years; for example, for mergers where you have second and third versions. Our insights are given at different points in time and new in-house teams would come and have no idea of the breadth of work that was done before,” Chappatte says.

Tiki-Toki, which is mostly built on the collection of previous advice, allows fee-earners and clients to see what went before.

“A new client comes in and has, for example, three years of legal advice all organised in one place,” Chappatte adds.

But there was another aspect of the tool that proved attractive to Slaughters. The platform also provides a space where lawyers and clients can collaborate on the management of projects, replacing the need for the traditional messy email exchanges.

In September 2016, Slaughters bought the tool off-the-shelf. However, Chappatte and his team knew that, in order to make it functional for them, they would need to carry out relevant adjustments and further developments. There were two main issues, as Chappatte explains. “The problem with the product was that you couldn’t upload documents without writing code,” he reveals. “And once uploaded, the documents were not kept in a sufficiently secure space.”

Following negotiations on the contract to use the tool, the team obtained a licence from the developers of Tiki-Toki that would allow them to bring in third parties to adapt the software to Slaughters’ specific needs. Legal solution specialists from technology consultancy Ethien changed the user interface so that lawyers could directly upload documents.

“We could easily upload files by dragging them on to the platform,” confirms Chappatte.

The tool was then customised and integrated into HighQ Collaborate, a secure client collaboration software used by the firm to attach, share and organise documents within the same platform. “HighQ also guaranteed additional functionalities such as blogging, which helped avoid sending emails and allowed the exchange of messages within the platform, and also the ability to allocate tasks to relevant teams,” Chappatte says. 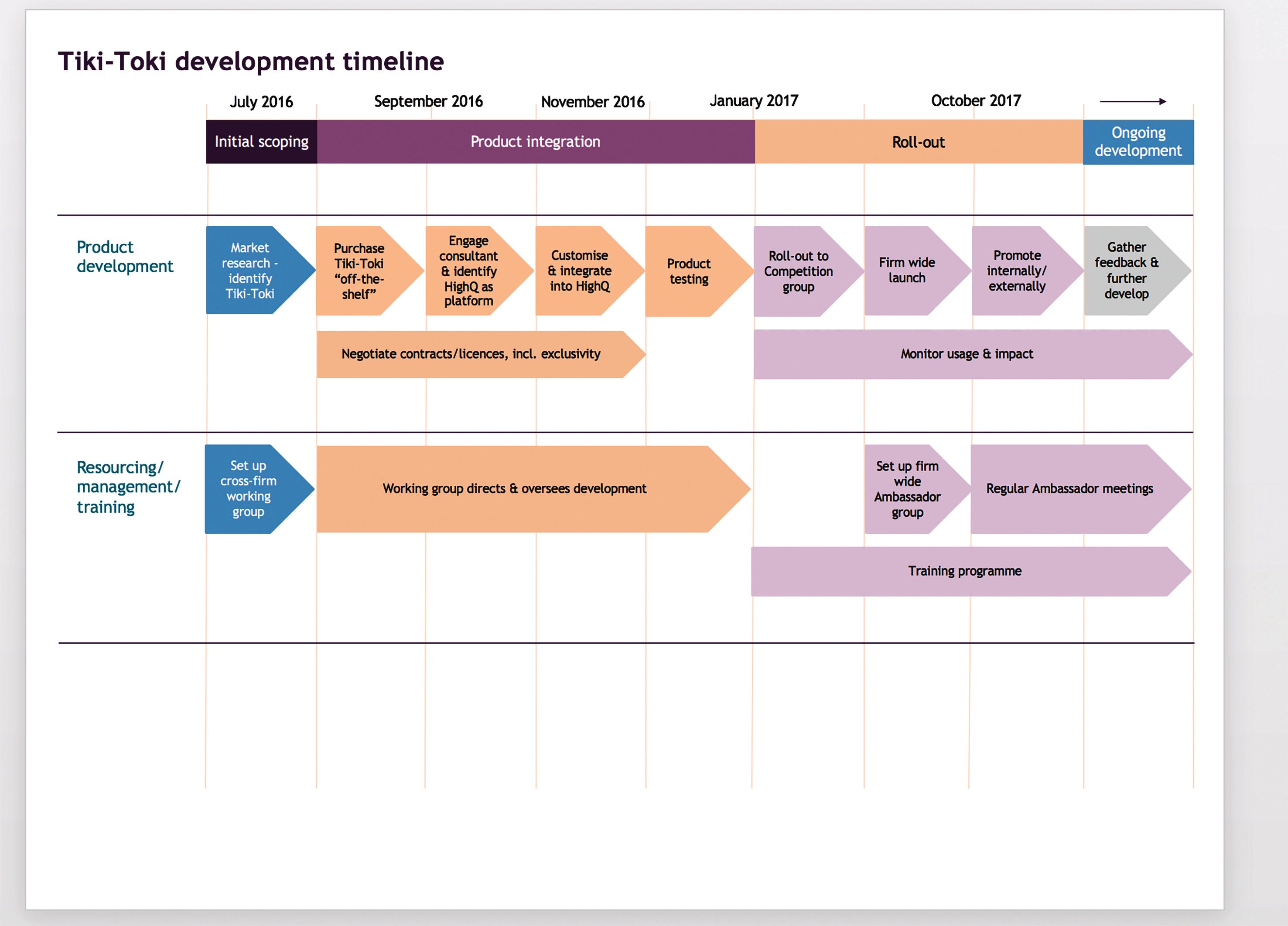 After months of testing, Slaughters released the tool in January 2017. Initially, it was restricted to Chappatte’s competition group, but it was later rolled out across the whole firm.

“Getting lawyers to change the way they work is never easy,” admits Chappatte. “Our question was: how do we get them to use this tool?”

Chappatte knew he had to get people talking enthusiastically about Tiki-Toki, encouraging others to give it a go in the process. So, in October 2017, he kicked off a campaign to promote usage of the tool internally.

“I got each practice in the firm to nominate a ‘Tiki-Toki ambassador’,” he recalls; “one partner and one associate per group that would champion the use of the product.”

These volunteers were tasked with introducing Tiki-Toki into their group by explaining its benefits and fostering an understanding of the possible applications related to each practice.

The ambassadors’ job was also to monitor the impact of Tiki-Toki on the different practices, share use cases and collect feedback for further improvements and developments. Every two months, the firm would hold meetings to assign each group particular targets and discuss the next steps in the deployment of the product. To address the sparse project management education of young lawyers, training in the use of the product became a compulsory part of the training process for trainees, fee-earners and business services employees.

“Everyone needs to have training sessions of two or three hours through the ambassador system, starting with the junior people,” Chappatte explains. “Getting them trained first ensured the product was implemented quite quickly and became a normal habit. Junior lawyers sit within different project teams. They need to learn how to identify relevant documents and comfortably move throughout the features of the system.”

During the second quarter of 2017, the tool became a normal feature of high-volume legal work, used in domestic and international matters such as corporate acquisitions, merger control filings and regulatory investigations.

Since the official roll-out, Tiki-Toki has been used on more than 55 projects and by around 700 lawyers and clients. The tool has also become a staple of client pitches. “Clients want to know you can carry out a project efficiently,” Chappatte says.

“One of the things we communicate is that by investing in this product we are also investing in innovation and in making life easier. It’s about reducing time and resources needed to monitor a project that might include 15 people.”

According to Chappatte, clients have been pleased with Tiki-Toki’s user-friendly interface and its ability to show an overview of multiple work streams “at a glance”, which allows them to easily search and retrieve files.

“At the end of the day the question is: are you improving client experience by using this tool? Are you managing it yourself better?” Chappatte says.

More than a year after the firm bought the product, Chappatte credits its success to the collaboration of people in its development and, later, in its promotion through the ambassadors network.

“It was good to have partners who knew exactly what they were looking for,” he says. “The problem with innovation is that you often have a disconnect between innovation and user. This initiative was driven by a need for a client-facing product to help better manage projects for the benefit of the client.”

Chappatte’s message for any other law firm embarking on a similar initiative is this: you need clarity and cohesion.

“You want a partner to clearly identify the need and to drive the project. You need to sponsor and support every step of the way,” he explains. “I would suggest setting up a co-working group to drive it forward. Have a very clear sponsor, a partner who knows what the firm wants.”

Then, he adds, you need technical expertise, bringing in people from the areas of technology and information management who can not only support the implementation of the software within the structure of the firm, but train fee-earners to use it as part of their daily job.

“You need technology, but you also need engagement,” Chappatte says.

From the start, he was supported by Slaughters’ Innovation Hub, which contributed decision-making in the development and adjustment phase, and later in spreading the use of the tool.

“It’s easy for projects to end up in the sand if there are too many decision-makers,” admits Chappatte.

The fact that the tool answered a specific client need also helped narrow down the steps to make it as effective as possible.

“It’s not about having everything,” Chappatte concludes. “It’s about curating a selection of documents for the clients and the project teams. When you’re adequately organised internally, you create an environment where everybody knows what they are doing.”

The post Case study: how Slaughters is taking charge of its timeline appeared first on The Lawyer | Legal insight, benchmarking data and jobs.