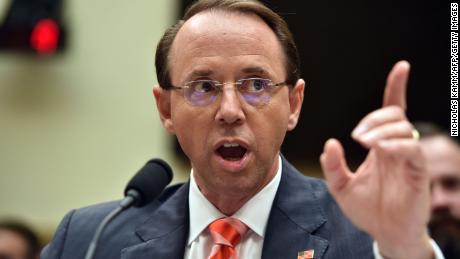 Rosenstein was scheduled to meet with chief of staff John Kelly before attending a previously scheduled national security meeting with other senior officials at the White House. But he didn’t expect to actually attend that second meeting.
Indeed Rosenstein had already offered Kelly his resignation on Friday after The New York Times reported that he had suggested secretly recording President Donald Trump and discussed an effort to oust Trump from office via the 25th Amendment. And as he pulled up to the White House on Monday morning — still the deputy attorney general, his resignation pending — he expected he would leave a private citizen, fired by President Donald Trump.
Instead, about two hours later, Rosenstein clambered back into his official SUV and returned to the Justice Department having emerged, unscathed, from his two meetings at the White House and a phone call with the President.
Minutes before, White House press secretary Sarah Sanders had released a statement that delayed a decision on his fate until Thursday, so that Rosenstein and Trump — who is in New York attending the United Nations General Assembly — can meet in person.
“I’m meeting with Rod Rosenstein on Thursday when I get back from all of these meetings,” Trump said later in the day. “And we’ll be meeting at the White House, and we’ll be determining what’s going on. We want to have transparency, we want to have openness and I look forward to meeting with Rod at that time.”

The President’s comments, at least for Monday, put a cork in the bubbling cascade of confusion, tumult and anxiety that had quickly swept the capital, promptly leading to discussions about the fate of the special counsel Robert Mueller’s investigation — which Rosenstein oversees — and drawing comparisons to Trump’s firing of FBI Director James Comey, which triggered Mueller’s appointment.
Washington’s political class and the public were not alone to experience the whiplash. Rosenstein, too, found his day turning out much differently than he expected.
Rosenstein had miscalculated how Trump would react to The New York Times report, overestimating how angry Trump would be, a senior administration official said.
After reading the Times report, Rosenstein expected Trump would be furious and swiftly fire him. His resignation on Friday was an attempt to pre-empt that. And when he arrived at the White House on Monday morning with his resignation not formally accepted, he expected he would be fired.
But while Trump asked associates in the hours after the Times report was published if he should “just fire him,” he was also skeptical about the report given it was largely drawn from memoranda written by FBI officials including former FBI Deputy Director Andrew McCabe, whom Trump despises and has long believed is untrustworthy.
And Trump’s relationship with Rosenstein — a man Trump publicly and privately disparaged for appointing Mueller — had also begun to improve in recent months.

But reports of Rosenstein’s resignation spread wildly on Monday morning.
Kelly had conveyed to associates over the weekend that Rosenstein had offered his resignation on Friday and that he had accepted it, a senior White House official said. Those close to the White House and others close to Rosenstein quickly sought to stress competing narratives that Rosenstein had resigned or that he was to be fired, to each side’s benefit.
As Monday drew in, senior White House staff discussed Rosenstein’s future at length, contemplating different scenarios. The President, meanwhile, was much more focused on the drama surrounding his Supreme Court nominee, one person close to him said.
But he still listened and absorbed the views of his advisers, including those such as the Fox News host Sean Hannity who warned that the Times report was a “set up” meant to provoke him to respond by firing Rosenstein. Trump watched Hannity make that argument on Air Force One on Friday evening and asked people about it afterward.
Even as Rosenstein remained in his post by the end of the day, the day’s saga prompted Democratic lawmakers to renew their calls for legislation that would protect Mueller’s investigation, which is probing Russian interference in the 2016 election and whether Trump has obstructed justice.
And the specter of a potential firing when Trump returns to Washington still hung over Trump’s administration, with some believing Trump could still take the action upon his return.
https://lawyerfirmnews.com/wp-content/uploads/2018/09/180717122630-08-rod-rosenstein-lead-image-large-169-2-1.jpg 259 460 Lawyer Firm News https://lawyerfirmnews.com/wp-content/uploads/2018/02/logo-lawyerfirm-news-300x100.png Lawyer Firm News2018-09-24 22:15:172018-09-24 22:32:04Rosenstein's tumultuous day capped with lingering suspense
Watch Kavanaugh Deflect Allegations As Trump Attacks Accuser | The Beat With...

She publicly backed him before knowing of mentions on yearbook pages of Kavanaugh...
Scroll to top