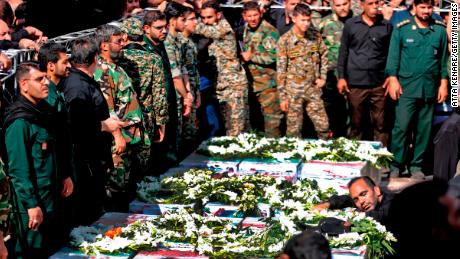 “According to the reports, this cowardly act was committed by the same people who are saved by the Americans whenever they are trapped in Syria and Iraq and whose hands are in the pockets of Saudi Arabia and the UAE,” Khamenei said, according to his official website.
“We will certainly give the perpetrators of this act a harsh punishment,” he added.
Iran’s Intelligence Ministry issued a statement Monday saying it had identified the group responsible for the Ahvaz attack, the state-run Islamic Republic News Agency (IRNA) reported. The report did not name the group, but said that 22 people who it described as “supporters and involved in the incident” had been arrested.
On Sunday, Anwar Gargash, the UAE Minister of State For Foreign Affairs, said “official incitement against the UAE in Iran is unfortunate” and that “Tehran’s accusations are baseless.”
Iran’s Islamic Revolutionary Guards Corps had previously said Sunday that no effort would be spared in the hunt for those responsible for the terror attack that killed 29 people and wounded 70 others. The casualties included both military personnel and civilians, the IRNA reported.
The Revolutionary Guards accused Saudi Arabia of supporting the attack’s perpetrators. Saudi Arabia has not responded to the allegations.
Saturday’s parade was part of nationwide celebrations in Iran to mark the 30th anniversary of the end of its eight-year war with Iraq.
Gunmen opened fire on armed forces marching inside a park as well as spectators who had gathered to watch the parade, Iranian armed forces spokesman Brig. Gen. Abolfazl Shekarchi told Mehr, a semi-official Iranian news agency.
The attackers all were killed during clashes with security forces, IRNA reported, citing the deputy governor-general of Khuzestan province, where the attack happened.
The semi-official FARS news agency said Monday that there were five attackers — not four as had been previously reported — and that three of the five men were from the same family. 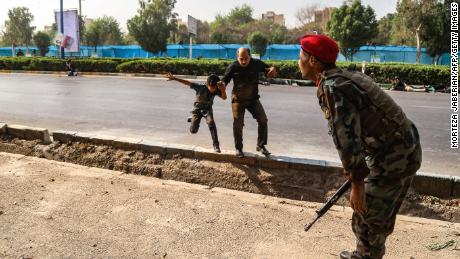 Iranian President Hassan Rouhani blamed “foreign mercenaries” backed by the US for the attack on Sunday.
“It is America who supports these little mercenary countries in the region. It is Americans who are provoking them. It is Americans who provide them with their required necessities to perpetrate such crimes,” Rouhani said on his official website.
“The government is ready to counter any action by the US, and the Americans will regret this,” Rouhani said. It was not immediately clear if this remark referred to the Ahvaz attack or the US withdrawal from the 2015 Iran nuclear deal.
“Most importantly, today Americans are bullying the world more than ever and continuing their unilateralist policies,” he said of the nuclear deal.
The US will not accomplish its “goals in Iran,” he added.
Rouhani made the comments ahead of a trip this week to New York, where he will attend the United Nations General Assembly.

US rejects allegations as ‘rhetoric’

But Nikki Haley, the US ambassador to the UN, rejected Iran’s accusations.
“You’ve got a lot of rhetoric coming from Rouhani. The United States condemns any terrorist attack anywhere, period. We’ve always stood by that. I think what Rouhani needs to do is he needs to look at his own home base,” Haley told CNN on Sunday.
“He can blame us all he wants; the thing he’s got to do is look in the mirror,” she added.
Despite increased tensions with Iran, Haley emphasized that the US was not seeking regime change in any part of the world. 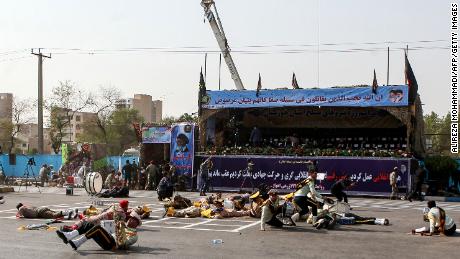 CNN’s Sara Mazloumsaki and Hamdi Alkhshali contributed to this report.