You are here: Home / News / 5 games to ramp up your tailgating fun 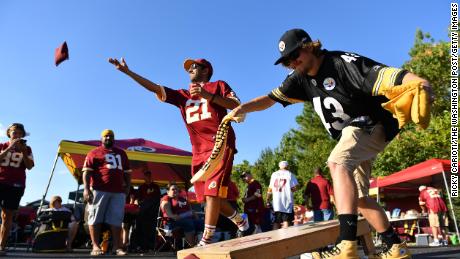 But what’s better than watching the actual game? Well, the tailgating, of course.
It’s not just about the burgers, wings, chili and other good eating both outside and inside the stadium (or the healthier fare, if you’re so inclined). And it’s not just about wearing your team’s colors or pre-game cheers to get pumped up before the first snap.
A big part of a successful tailgate is about the games to play while eating or enjoying that adult beverage in those hours spent before kickoff.
Here are five games that will ramp up your tailgating fun. (And GO GIANTS!)
Who knew tossing bags of corn could make for a great time? Cornhole is the ultimate utility tailgating game where you can toss a bag with one hand and hold a drink or a wing in the other. Just make sure no one crosses the game mid-throw — a bag to the head could really put a damper on the party.
What you need: Two cornhole boards and 8 small bags (2 different colors, a set of four in each color).
Players: 2-4
How to play: Set up the boards about 27 feet apart and take turns tossing the bags onto the opposite board. Scoring is one point for each bag that makes it onto the board, and three points for bags that make it into the hole. Points cancel out, so for example, if one team scores four points and the other scores three, the other team wins that round with one point toward their final score and they toss first in the next round. And be careful — each team can try to knock the other team’s bag off the board and any bag that touches the ground doesn’t count. When all the bags have been tossed, add up the score. The first team to get to 21 wins! (And check this out for essential cornhole terms — there’s even a song!)

Also known as ladder toss, ladder ball, ball rope and some other, er, more stereotypical names, you should probably go into this game after some practice shots. Throwing the “bolas” — two golf balls attached to each other by a rope — onto a ladder takes a weird amount of skill. Snaps if you manage it without tossing it into the chili bowl.
What you need: A short ladder with 3 rungs and 6 golf ball bolas (2 different colors, a set of three in each color)
Players: 2-4
How to play: Set up the ladders about 15 feet apart and each team takes turns tossing the bolas toward the opposite ladder. The top step is worth three points, the middle is worth two and the bottom is worth one point. Each player will throw all of the bolas before the next player goes. Like cornhole, teams can try to knock off the others’ bolas, but unlike cornhole, a player can try to bounce their bola off the ground to score. The first team to get to exactly 21 points wins!
You need a lot of room for this game, so it might not be the best choice for parking lot tailgating, but it sure is fun and guarantees you get in a workout after eating all those hot dogs. Before going into this one, though, make sure you know how to toss a frisbee and/or can chase a frisbee and get it into a can (or is it kan?).
What you need: Kan Jam buckets and a frisbee
Players: 4
How to play: Set up the Kan Jam buckets 50 feet apart; each player will take turns tossing a frisbee toward the opposite bucket. Their teammate on the opposite side will help score. Points are scored by hitting the bucket (two points), smacking the tossed frisbee into the bucket (three points), or smacking the tossed frisbee into the back of the bucket (one point). Win the game by tossing the frisbee into the slot in the front of the bucket. If that doesn’t happen, the first team to 21 wins! 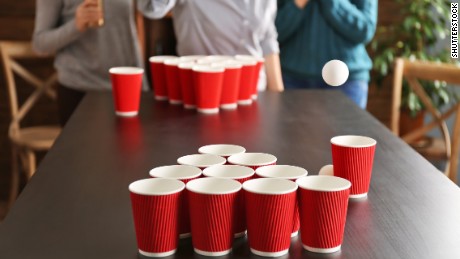 Whether you call it beer pong, beirut or six cup, this game is the ol’ faithful of tailgating — and it’s easy to set up. All you need is a table, 12 cups and two ping pong balls (though you should probably have an entire package on hand because you’re guaranteed to lose at least one), and you have yourself a game that will last the whole tailgate.
What you need: A table, 12 (or 14) Solo cups and 2 ping pong balls
Players: 2-4
How to play: Pour some water in each cup and set them up in triangle formation, six on each side of the table. Teams set up on opposite sides of the table; each person has a chance to toss both ping pong balls. The object of the game is to get rid of your opponents’ cups. Each ball tossed into a cup means the opposite team takes it away; bounce the ball into the cup, and two are taken away. But be careful — the opposite team can swipe at a bounced ball. The team with cups still standing wins!
Extra advice: If you decide to play with that adult beverage, add a cup of water on either side of the table to wash off ping pong balls between throws, because — gross. 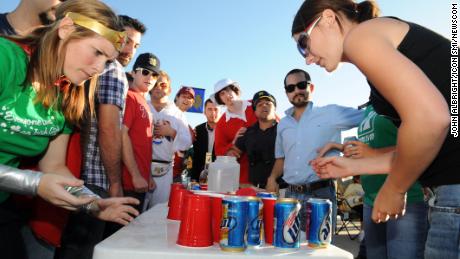 Speaking of easy to set up — flip cup is the game that keeps the tailgate going. Whether one-on-one or 12-on-12, all you need for this gem is a cup per person and a competitive attitude. Just don’t be “that guy” who can’t chug or flip a cup or you’ll be the one on snack stand duty for the whole game.
What you need: A table and Solo cups
Players: 2+
How to play: Teams set up on opposite sides of the table with one cup filled to the first line with the adult beverage of choice (under 21ers can get in on the fun too with water or juice). The first players tap cups and the game starts. Chug what’s in the cup, and place the small end on the table and try to flip it with one hand to the big end. The next player goes with the previous one flips their cup successfully and so on until the final player goes. The team to flip all their cups first wins!
Disclaimer: Don’t be a cornhole. If you’re consuming alcohol, always have a designated driver and don’t drink underage!
https://lawyerfirmnews.com/wp-content/uploads/2018/09/180913173626-tailgating-games-cornhole-restricted-large-169-1.jpg 259 460 Lawyer Firm News https://lawyerfirmnews.com/wp-content/uploads/2018/02/logo-lawyerfirm-news-300x100.png Lawyer Firm News2018-09-15 10:09:042018-09-15 10:47:085 games to ramp up your tailgating fun
Why is George W. Bush wasting his non-Trumpiness?